How do we define ourselves? And what makes us who we are as individuals and as a collective? Thuy is a Vietnamese self-taught photographer who is interested in using photography as a tool to navigate and explore her identity and her Vietnamese roots.

The image of her hands, using both her middle fingers and the ring fingers, stretching her eyes into 2 thin lines making a strange face in front of a mirror captivated me. I even tried it myself — the muscles around the eyes were stretched outside of their comfortable placements, feeling strange and unpleasant yet present. What intrigued me the most was her self-portrait in front of a mirror ironically puts her in a place of wanting this strangeness to be seen yet one cannot even see herself.

As a new member joining badeyesphotos, Thuy is joining me in a long deep conversation about how photography came into her life, her works and the process behind them and life in general. Hello Thuy! Thanks for joining me and discussing with you about your photography journey.

When I was studying Thuy’s work for the interview, I could easily resonate with her emotional rides as a female photographer myself working in Asia as well. Our identity is constantly changing and shaping from our own changing body, our family influences and to the nation’s political and cultural impacts. Here Thuy is not afraid to speak and stand up for what she believes in, despite the world trying to categorise herself into labels of this or that, she used photography to express her struggle yet at the same time stood a unique point of view of expressing who she is as a photographer.

Please check out her work:

Rising emerging Chinese artist Ronghui Chen, also a World Press Photo winner, talks about China and its urbanisation in his 3 trilogy work – Petrochemical China, Runaway World and Freezing Land. In his project Petrochemical China he looks at the country’s industrialized cities, Runaway World he points his lens at cities desperate to turn a buck through gimmicky tourist attractions. The final installment is Freezing Land, which Chen says is an examination of cities on the verge of vanishing.

The series Freezing land is about displacement and searching for belonging: in a rapidly urbanising China, how do the youth find belonging? What are the insecurities and anxieties they collectively share?

Bordering Russia and North Korea, the region, with ample natural resources, was the first to develop heavy industries in the 1960s and prospered for decades. There were 15 million immigrants to northeastern China in the Mao’s era. But since the 2000s, the northeast has become China’s most recessionary land as resources dwindled and other regions caught up. Dying industries and shortages of opportunities have been forcing people out of their home and to other parts of China in pursuit of work.

Using the social video app Kuaishou, he looked for young people who were willing to share their stories through the 8×10 large format camera. Connecting with his subjects through modern technology adds an additional layer of dystopian ambiance to the project, highlighting the modern methods that young people are using to avoid isolation in the region.

One of the most striking images in the series depicts a young boy sitting forlornly in a brightly colored room, holding a wig in his lap while staring at the ground. “The boy in this photo is 14 years old,” Chen explains. “He’s a live-streamer, or what some people call a broadcast jockey. Live-streaming is his direct source of revenue. If a fan likes him, they are sent digital rewards purchased with in-app currencies, which are bought with real money. He has lots of fans online to interact with, and he even makes money from them. But, he doesn’t have a lot of friends in real life. His life seems colorful, yet full of loneliness.” 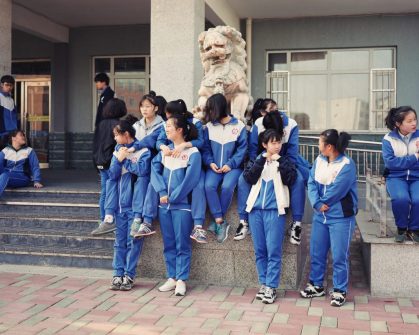 Recently, I’ve been looking a lot into theories of photography for sure, and also photomontage works. I used to have this narrow vision of photography of Bresson’s decisive moment, praising Magnumphotos as God, and that was it for me for photography. Blindly ignoring what a big world is out there for making work with images. Maybe it was a good thing, so to just focus on one type of photography or maybe it was a bad thing, because there are so so so much more other possibilities with photography.

What changed me was, I got tired and bored of decisive moments. They are yes, decisive moments, of what claims to be moment of “truths”. Yet theories of photography opened up the question of photography as a medium. I mean, really opened up how I view and understand this medium. And photomontage, is one way of working with images that I feel I’d like to have a taste on. Similarly to decisive moments, there are already materials to work with (former, with what’s happening around the world; latter, with archival images and other materials).

Most immigrants exist in two worlds, the world of memories and visual connections of their growing up and the new realities of living in a culture where all is not familiar. This search for what is home, for the roots of that connect them to the most primal self is the main theme of Priya Kambli’s work.

“Buttons for Eyes” talks about loss, memory and identity (I guess I have a subconscious love for identity and loss, because of the work I’m drawn to). Kambli physically manipulates old family photographs and then rephotographs the altered artefacts. She uses light and flour as manipulative elements to add layers for starting a dialogue about cultural differences and global similarities. 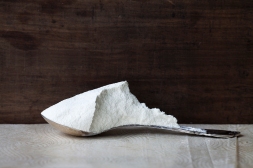 She works with archival images which allows her to connect the past with the present, to bring forward memories, and to reimagine them adorned with tokens of the everyday – in a sense, making these memories physical. The way in which she maintains the photographs is akin to how Indian housewives tend to their kitchen deities – hence the use of flour. The meticulous patterns crafted on it symbolises the “Indianity” of her past identity (literally these patterns of flour can be blown away in seconds) – imprinted onto a physical form that she is re-creating for the present.

Much of the work talks about the separation and the exchange of cultural differences and similarities between herself and her sister, whom chose to stay in India whereas she immigrated to the US after their parents passed away.

There’s a final layer of narrative to this work which comes from the title “Button for Eyes.” It comes from a question her mother used to ask, “Do you have eyes or buttons for eyes?” Her mother’s concern was about Kambli’s inability to see trivial objects right in front of her, but also about our collective inability to see well enough to navigate the world. “It is a question laced with parental fear,” she says. Which goes back to, are we ignorant to these cultural differences and global similarities in the world? The laced patterns on the images may also symbolises not only the ignorant we ourselves may have, but those that derives from the parental fear in order to protect their children.

“Solastalgia” by definition it means the distress caused by environmental change. In the case of Shi Yangkun’s series, it is about a form of melancholy evoked by changes that have happened in the used-to-be familiar home context, referring to a special homesickness sensed by people when they are still within the home environment.

What drawn me to this work is probably because of my own history of leaving my home Hong Kong, and studying and living in UK, and now being back, everything has changed. And that sense of loss is permanent, unlike nostalgia which may just be temporary.

“People are eager to go back home because they feel safe and comfortable with familiar attachments. From the view of nostalgia, the loss of attachment is temporary, because a person believe that they can go home sooner or later. The memory of these attachments could provide comfort. However, in the case of solastalgia, I would argue, the loss of attachment is permanent, which means even though they are standing in the original place they cannot find these attachments any more.”

The photographs speak to me because I totally understand that feeling and I can really resonate with the visual images. In his work, he questions not only the impact of the industrialisation but also reflects his uncertainties under a particular environment. 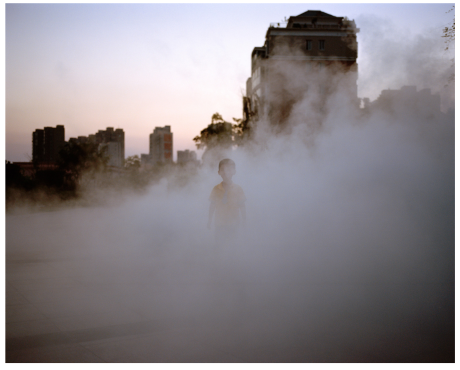 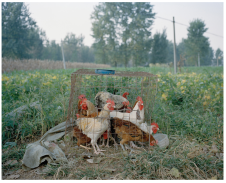