Zhang Xiao the star photographer from China who’s best known for his work “coastline” has been making works rigorously ever since (as he shared on the projection night). The installation work “Apple” was one of the main exhibitions showcased at the Lianzhou Museum of Photography during the festival.

Using apple as the anchor point, the work talks about how the cultivation of apple from the west brings in apple industrialisation in his hometown, Yantai and how that impacts on local people as well as the environment. 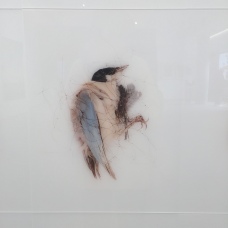 The work presented was a multi-media work with photographs, polaroid emulsion prints, videos and a apple tree sculpture installation that narrates the story from how apples are collected and industrialised to markets and other trading centres, to the effect it has on the environment and the society. The progression of the exhibition goes from photographs and a video of how apples are processed in the factories to a wall of meticulous yet beautiful photographs of death birds. Zhang uses birds as the channel for the storytelling because many birds are trapped in-between electrical fences that were built to protect the apples in the factories. The way they were photographed felt very much like corpse photographs but also photographs of specimen where the choice of printing on acrylic or glass reinforces the feeling of preciousness of these corpses. The very last piece of artwork was created from a collaboration with the local people putting fake apples printed “Gong Hei Fat Choi” onto winter trees, symbolising their wishes for prosperity for the coming year. This work shows how the value of apple as just a simple type of food changes according to human impacts.

A hidden gem from the Lianzhou Foto festival was the series by Yanxin Guo “Tales of the Invisible”. Stamping from her personal experience when she returned to China last summer where she witnessed the biggest typhoon yet and 13 people died, it strikes her that the invisible can become something powerful and one should never overlook.

Her series of photographs are images which hints the invisibles through the visible. Clean, poetic and sentimental images transcend this strong feeling that there is some magical power in the nature which is stirring behind e.g. an image of a gush of water in the ocean pairing with the boy curling up, or the lite up trees at night pairing with a portrait of a Chinese girl with her hair blowing.

The images are subtle, which combined with the fragmented story written by Guo reinforced further the concept of “Tales of the Invisible”. The series is highly metaphorical yet could be easily felt and filled the room with mystery. 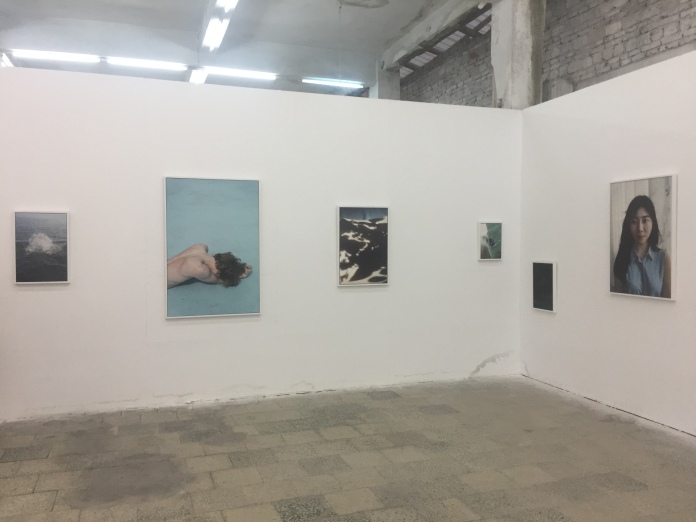 The book will be printed soon so watch out for this one.

“A Long Day of a Certain Year” (某年某月某日) by Chinese photographer / artist Li Lang won the Puntum Awards at the Lianzhou Foto Festival 2019. This photographic installation encompasses pictures he systematically took out of the window while on a round trip on a high-speed train across China. The work was installed as a 5 multi-channelled video with an image displayed for a second at a time, starting from the first channel and rotating to the next channel throughout the whole video. The idea was to recreate the space of the train carriage, in which windows display the projected slideshows and voice interviews, mirroring the feelings of one looking out of the window on a train and thoughts running by. 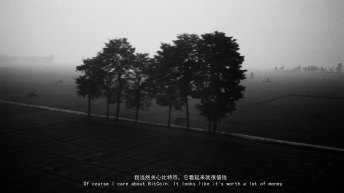 © Li Lang, from the series ‘A Long Day of a Certain Year’ ; Source @ Jimei x Arles

His works uses the images from the train window to juxtapose with recorded voices of about 50 online volunteers about their lives and social realities. He wanted to show through the work that the things that are going on in society are like the view we have from the train: constantly changing, random, contingent, and uncertain. The scenery is familiar yet unfamiliar to everyone. However, the train will come to a halt eventually and sending its passengers back to their reality. This is a metaphor for the relationship between people and society: whether watching or being in it, you cannot leave.

Here’s the artist statement of the work (which I think reads well into the work):

The work is so simply put yet it speaks to such a wide range of audience. They can so easily resonate with the feeling of future uncertainty and the social reality that we face everyday. I extremely adore how he brings the everydayness into his artwork which can also be interpreted more deeply with the current social and political affairs.

Here are the 2 interviews he did (both in Chinese):

Rising emerging Chinese artist Ronghui Chen, also a World Press Photo winner, talks about China and its urbanisation in his 3 trilogy work – Petrochemical China, Runaway World and Freezing Land. In his project Petrochemical China he looks at the country’s industrialized cities, Runaway World he points his lens at cities desperate to turn a buck through gimmicky tourist attractions. The final installment is Freezing Land, which Chen says is an examination of cities on the verge of vanishing.

The series Freezing land is about displacement and searching for belonging: in a rapidly urbanising China, how do the youth find belonging? What are the insecurities and anxieties they collectively share?

Bordering Russia and North Korea, the region, with ample natural resources, was the first to develop heavy industries in the 1960s and prospered for decades. There were 15 million immigrants to northeastern China in the Mao’s era. But since the 2000s, the northeast has become China’s most recessionary land as resources dwindled and other regions caught up. Dying industries and shortages of opportunities have been forcing people out of their home and to other parts of China in pursuit of work.

Using the social video app Kuaishou, he looked for young people who were willing to share their stories through the 8×10 large format camera. Connecting with his subjects through modern technology adds an additional layer of dystopian ambiance to the project, highlighting the modern methods that young people are using to avoid isolation in the region.

One of the most striking images in the series depicts a young boy sitting forlornly in a brightly colored room, holding a wig in his lap while staring at the ground. “The boy in this photo is 14 years old,” Chen explains. “He’s a live-streamer, or what some people call a broadcast jockey. Live-streaming is his direct source of revenue. If a fan likes him, they are sent digital rewards purchased with in-app currencies, which are bought with real money. He has lots of fans online to interact with, and he even makes money from them. But, he doesn’t have a lot of friends in real life. His life seems colorful, yet full of loneliness.” 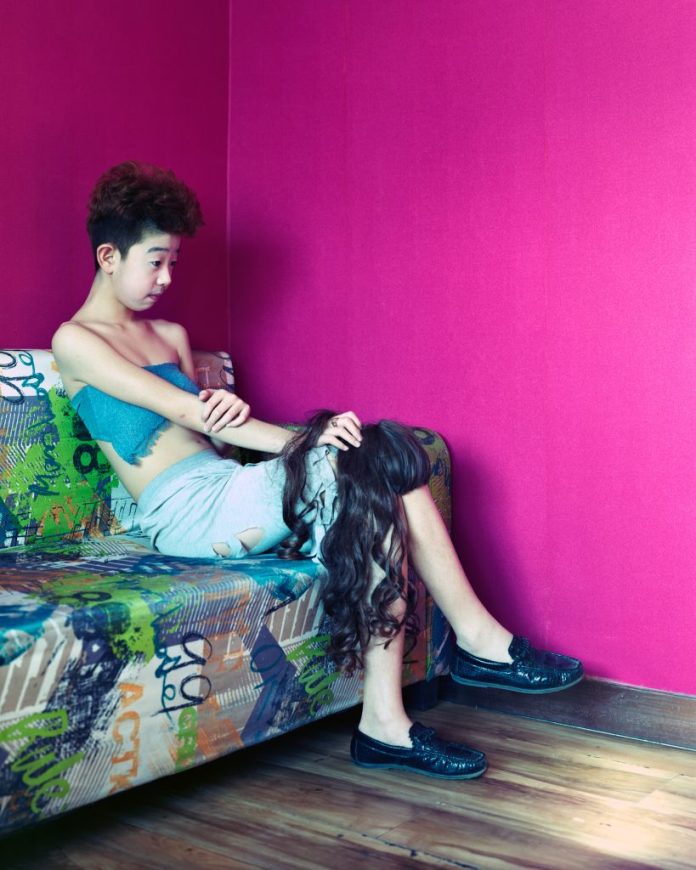