I don’t know how many times I’ve watched this BAFTA award winning documentary series about art and images. But every time I re-watch this again, something new inspires me. This is the magic of really great work.

Episode 1 – John Berger talks about the reproduction of images due to the invention of photography and new media e.g. television. How this has an impact on how we appreciate art from the past.

In summary, he talks about how art was appreciated within context – the frame, the place displayed which creates the whole aesthetic experience subject to that piece of art. And art was unique in that sense – one piece one place one time. With the invention of photography, art becomes trasmittable – we no longer need to go to a particular place or travel to a certain country to have this experience. The art pieces can be delivered on prints, on television, in the context of our home. But will this experience be the same?

Berger argues that how we see the original art piece is entirely different to how it is being transmitted and displayed in front of our eyes. In some way, you are able respond to the original art piece by choosing how to see and appreciating the authenticity of it; in contrast, with the transmitted work, how the art work is arranged (e.g. zoom in or out, panning left or right, what music to play in background) is entirely coded to what the presenter wants us to see. The art can become easily manipulated and diverge from its original meaning. It has become like words rather than holy relics. He emphasised at the end that we need to be sceptical of how these images and meanings are arranged.

Episode 2 – he talks about the differences between being naked and nude – where the former is about being seen as oneself, whereas the latter is presenting oneself as an object, being on display without clothing. This refers to the portrayal of the female nude, an important part of the tradition of European art. Berger examines these paintings and asks whether they celebrate women as they really are or only as men would like them to be. Photography has elevated this issue to raising beauty in the public image of women and how this influences how women see themselves today.

Episode 3 – in this episode Berger examines where the value of art comes from. Before photography, art was somehow raised above life, turning it into a kind of religion. He said that when you buy a painting you also buys the look of the thing it represents. Early paintings were representations of private possessions, and some how possessing these paintings deduce a form of pride – because the sense of what you can put your hands on became closely connected with the sense of ownership. The celebration of merchandise began.

Episode 4 – the last episode he talks about the publicity of images. Where traditional art shows private possessions that consolidates the owner’s sense and value, the public images share a message of what we don’t have. The sight of it makes us want to possess it so to be envied. Publicity is a way of manufacturing glamour. It plays upon fear. Objects themselves are neutral, only publicity and images that raises or demolishes their values.

“In the urban world, we are surrounded by images of an alternative way of life. We may remember or forget these images – but briefly we take them in. And for a moment they stimulate our imagination, either by way of memory or by anticipation. But where is this other way of life?”

Barthes, has clearly demonstrated that there are signs in photographs. In his theory,

Here, is the famous advertisement that Barthes uses in his text “Rhetoric of the Image” to explain his theory of how to read photographs. 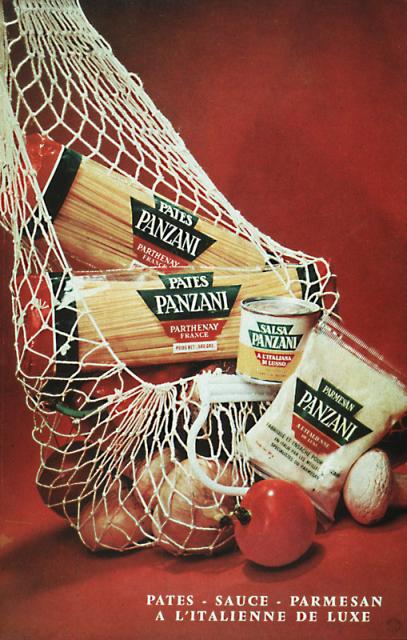 According to Barthes, there are 4 signs here that can be read from this image:

There are also denoted message here, meaning the signifier is same as the signified. E.g. the image of tomatoes signifies tomatoes, the image of pasta signifies pasta. We still need to acquire these anthropological knowledge to be able to read these messages.

In his text, he claims that there are 3 messages from a photograph:

What is a photographic message? Is there a structural analysis into what a photograph transmits?

A lot of the philosophers have been saying how closely photography is related to realism (Walton, 1983). Even Barthes is saying that it is a literal transformation of the reality onto light sensitive photographic paper (what he later calls – the denoted message). Making a photograph does not rely on the beliefs of the creator, as Walton says, unlike a piece of artwork. A photograph, although still depends on the choices of the framing and technical skills of the creator, it in itself is something recorded from what’s in the world. Whereas with art, the creator can create and put onto the canvas of anything that he imagines or hallucinates.

But Barthes argues that there is a second message that photography transmit – known as the connoted message – which derives from the decisions of the creator e.g. frame, composition, style to the extend of how the society receives it i.e. inputting the cultural context into the composition of the photograph. Even with press photographs there are connoted messages – from composition, treatment, words attached to it plus the newspaper company itself are symbols to how the public reads these signs (note: this is especially transparent with the image consumption during the midst of Hong Kong protests). Barthes says that the connotation is realised at the different levels of production of the photograph – trick effects, pose, objects to photogenia, asetheticism and syntax.

Trick effects are often used in propagandas e.g. the American press 1951 photo of Senator Millard Tydings and Communist leader Earl Browder. The heavily connoted message in this photograph is really a sign only for certain society and people with certain values. Without understanding the history or the cultural context of what was happening in USA during 1951, this image is merely an image of two people conversing.

Objects are inducers of association of ideas e.g. a bookself = intellectual. So are people (but the associations are more complex e.g. Mother Teresa = compassion). In a photograph, objects and people are the vocabulary of the visual image, and how they are composed and posed turn this lexicon into syntax. “E.g. a window opening on to vineyards and tiled roofs; in front of the window a photograph album, a magnifying glass, a vase of flowers. Consequently, we are in the country, south of the Loire (vines and tiles), in a bourgeois house (flowers on the table) whose owner, advanced in years (the magnifying glass), is reliving his memories (the photograph album) – Francois Mauriac in Malagar (photo in Paris-Match).” (Barthes, 1971).

With photogenia, it relates to the technology of photographic production (lighting, exposure, printing) through which certain effects (motion blur, double exposure etc) create connotations in the photograph; aestheticism is about connotation based on classical paintings e..g classical rules of compositions and syntax, is about the connotation created by viewing a sequence of images and which emerges from the photographs in relation to each other rather than singly.

What Barthes also mentioned in this chapter from Image, Music, Text (1971) book is the relationship between text and images. Formerly, images illustrates the words but when text are attached to an image, it has a parasitic nature to quicken the understanding of the image and it affects how the image is being read. As Barthes says,

“The relationship is not the image which comes to elucidate or realise the text, but the latter comes to sublimate, patheticise or rationalised the image.”

Sometimes the text accompanied can invent a totally new message or contradict the image to produce a different message to the reader. So the big question is, do we read photographs based entirely on its entity, or the message is eluted or deluded by the surrounding text?